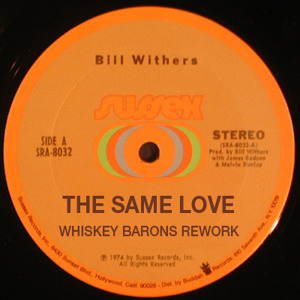 It’s that lovely time of the week again. Here’s the thing — I don’t know if Bill Withers ever realized that his own work would be turned into a newly sexy re-creation. The rework brings us a funky slow house type beat, in that new instruments and sounds are introduced after every few bars. But what really slays me, can be heard around 4:20. I’ve always said that the fade in and out of vocals (or any beat for the matter), is one of my favorite moves that a producer can do. I know it might be cheesy, but how can you not feel excited when the beat is brought back to normal volume? No longer in the distance, you’re re-introduced to a sound that is more powerful than ever, one that draws a bigger picture than before.

Your love is like a a chunk of gold
Hard to gain, and hard to hold
Like a rose that’s soft to touch
Love has gone, and it hurts so much.”

These lyrics are so matter of fact and simplistic that it made me think twice. But here’s the realness: the build-up of this song, it’s multiple levels and personas, all play into one another but also manage, beautifully, to mirror a dissatisfied love. It’s build-up leads us to a place that is unsuspecting and still slightly wary, but all the more different from the beginning. Though there’s that underlying sultry bass that holds our hand, letting us know that no matter how much everything changes, how quickly things transition for the unsuspecting audience, the bass is still there. Which means that something is still there.

It’s strange, love. It’s been on a lot of our minds, I’ve noticed lately amongst my fellow EMPT writers. It’s always on our minds, I think. We’re all secretly hopeless romantics, I think that’s what initially attracted me to this blog in the first place. But I love the fascination among writers, because it directly mirrors the fascination that musicians have with it. It’s the only emotion that is so difficult to put a finger on, the only emotion that doesn’t lie on the tip of your tongue when trying to explain how you feel to your best friend who watches you cry or laugh hysterically, and yet, music works so well with it. Maybe it’s because the two ideas — music & love — are the same. They’re both difficult and easy to understand all at once, complex and easy-going, sexy and confusing, and ultimately, beautiful. Always. No matter how terrible the ride is, or how blissful the ride is. We can take beauty from both. It’s no wonder so many beautiful musicians are fascinated by love.

May your Thursday be filled with all of the above.