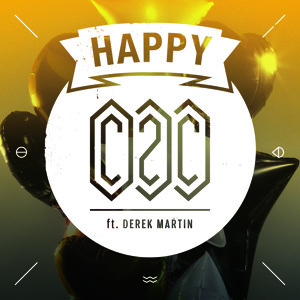 Well, seeing as I just danced for like two whole minutes at my cat to this song, I think it’s only fitting that I write about it. I also want to talk forever and ever about their live show which I attended on Thursday at Irving Plaza. But I won’t talk forever, I promise.

There’s a lot to say but let me begin by saying that The Knocks were a fantastic opener for C2C. We’ve talked about them before, and I understand the hype now. They’re so much fun live, with an excellent selection of songs and a fair gauge of what the crowd is into. Seeing as a lot of the audience at this show was French, they played a lot of funky electro, and even managed to get live edits of a couple of Justice’s tracks.

I was kind of turned off by the amount of pushing there was in the crowd, more so than usual, but I was quickly distracted from that once C2C entered the stage. Four turntables set up on top of boxes that played a variety of animations and light shows over the course of the performance.

They opened with The Cell, which is the first track on Tetra. Perfect opener, high energy and the smiles on each of the men’s faces were priceless as they watched a New York crowd go absolutely bonkers for their music. The moment that I heard the opening notes for Happy, I knew that things were about to get a little more wild. At that point, I turned to my friend, huge smiles plastered across both of our silly faces, and said, “They wanted to make a song about happiness, and they just happen to have a room filled with really happy people.” And that was true, as I looked around. All night, my friend and I were dancing next to this one dude whose sole intention was to move his body all night long. He arrived alone and left alone, wearing a fedora and simple clothes, he was the embodiment of what C2C’s music is about. It’s about art, craft and technique, sure, but it inspires such an overwhelming amount of happiness in so many people. It’s an instantaneous amount of happy, like when you’re sitting in your living room and your roommate puts on Down the Road and you hear the first ten bars, immediately smiling and asking who the eff this is? Because you’ve never heard such a happy balance of sound and music.

As a former turntable DJ (I took classes and have since not been able to practice, but I would still know what to do if given the opportunity), I was absolutely floored by the tricks that they pulled on stage. Everything from trading places, to working as four on one turntable with one person scratching while the other worked the cross fader. These are standard tricks for them, but me being the rookie that I am having enough trouble with simple looping, it was a magical sight.

These Frenchmen do a pretty excellent job of creating sound that embodies a good feeling, and then pairing it with a video that matches that visually. So if you haven’t seen the video yet, look below.

The show ended with an incredible tribute to the Beastie Boys where the members of C2C took turns rapping their own verses to Intergalactic. As some of you know, there’s a lot of overlap between Hocus Pocus and C2C, and I was secretly hoping that they would break out into rap earlier in the show. Nevertheless, this dose of rap was enough to leave the crowd really pleased in a high energy way, the perfect way to leave a crowd after a great night.

That said, this track should give you a lift if you’re down and keep your spirits up if you’re up! Enjoy.