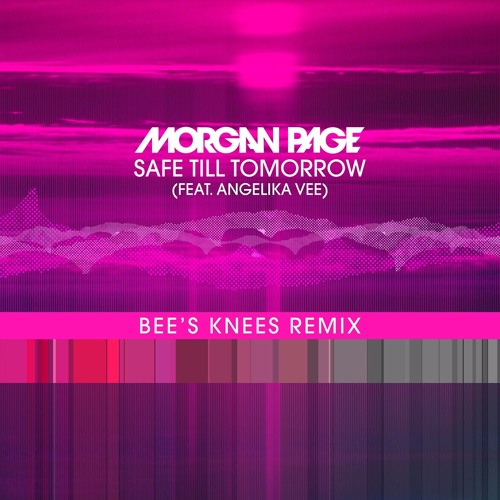 This is one of those rare songs that simply sounds like a bunch of shit i’ve loved throughout the years. It’s a beautiful collection of sounds and vibes that have resonated with me in the past, and certainly speaks loudly and clearly to my soul at this very moment. I get this strange sensation when one of these songs comes my way – it feels like it fits into a certain part of my life, even though the song wasn’t around then. It feels like it was the soundtrack to a treasured old memory, feels like it had already been my favorite song before. It happened with Foals “My Number.” For some reason whenever I hear that song, I feel like I’m in Paris hanging out at a bar at like 3am, when all the true party people have finally settled in. I can almost remember a moment hearing it at a certain Parisian spot, even though the song came out a year after I moved back home from France and i haven’t been back since.

The second I heard “Safe Till Tomorrow” I felt like it had been my favorite song for years. It fits into memories of driving around at night smoking blunts with friends, vibing to the music and feeling as free as I ever had. It feels like the soundtrack to every single time I ever stepped into a night club, already tipsy, knowing I was going to meet up with a girl I liked, the bartender already pouring my drink. Absolutely on top of the world, as confident as I ever had felt, soaking in all the beauty and energy. It feels like the favorite song I would have played for my high school friends over and over again till they too admitted it was their favorite song. It’s the song I’d play for a girl i liked to show her that my taste in music is more sophisticated and classy than her current loser boyfriend.

Other than the pillow-soft vocals, it must be that bassline. That disco bassline is like “good time insurance” – for me, it’s absolutely impossible to not vibe with a song that rock this kind of flowing, rich, syrupy bass line. It’s a mark of timelessness, and must be the reason why this song feels like it would be relevant at any point over the past few decades. That and a million other gorgeous things about it, but that bassline is definitely the T & A of this sexy baby.