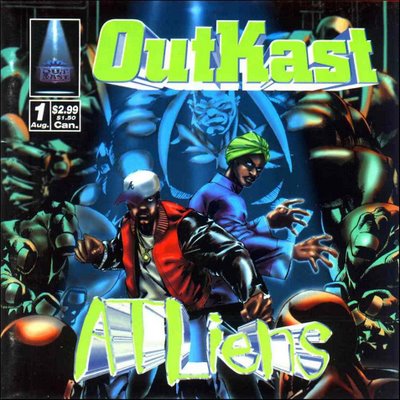 When it comes to Hip Hop, no one will argue that the boys from Atlanta were in a league of their own. OutKast never made gangsta rap, they didn’t make southern hip hop and they sure as hell didn’t make boom bap, they made OutKast. As fads came and went they continued to deliver unique lyrics and productions that always reminded us of hip hops endless potential as a form of expression.

The alienators cause we different, keep your hands to the sky…”

It’s safe to say they are the most underground minded hip hop group to have major commercial success and in this world that’s quite impressive.

So, a throw back BANGER from OutKast, yes please!  ATLiens was their second album from 1996 and it’s a great one. I would have been 10 years old and yes I was listening to OutKast at that age since my swag older brother listened to all the sickest music. You can’t beat the old school joints so I wanted to relive this jam with all of you, ENJOY!

Now throw your hands in the air
And wave ’em like you just don’t care
And if you like fish and grits and all that pimp shit
Then everybody say O-Yea-yer!”