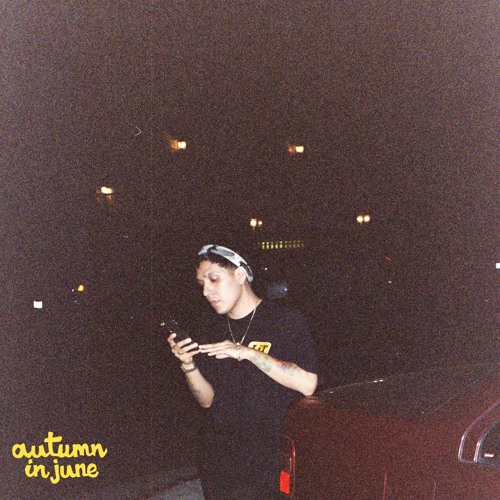 Autumn In June has always had insights into life in Los Angeles that feel more authentic than most music that emerges from the city. Rather than the bright lights that generally are the main focus, he channels the minuscule moments that occur under the radar throughout the city streets. On “Call Me When The Party’s Over” he masterfully walks through late night calls – it’s a situation applicable to any city, but because of the deep sense of place he weaves through his music, you can imagine the low buzz of cars crossing highways and imagine the handful of people wandering through neighborhoods as night time takes hold in the city of angels. It’s a wonderfully grainy lens through which we’re able to observe the smallest facets of his life.

The most minute moments make for the best art in my opinion. It’s a lot more fascinating to make phone calls have this sense of gravitas rather than tackling large, generalized topics. It also comes across as more human, more personal, more compelling. My favorite moments are seeing the lights flicker on around the city when dusk turns to night, seeing a couple in love appreciating one another, driving through downtown and getting lost within its skyscrapers. Those are the moments that stick with me and inform my love for the city I call home. I’ve seen Autumn In June’s name floating around blogs for a while now and have heard singles here and there, but with his debut album MAGENTA out I finally took the time to sit down and give the South Central kid a real listen. After 45 minutes of synthesizer heaven, my days of growing up around my mom playing new wave came rushing back while my ear as someone who writes about music in 2017 was excited beyond belief. His vocals have that authentic sound to them that’s hard to quantify but was so prevalent in new wave, but at the same time they’re laced with autotune that makes them an unmistakable product of the now. And his songwriting? Calling it diverse would be a serious understatement; this guy can write an introspective r&b track that’s driven by keys, a melodic indie ballad, and a funky 7 minute epic all within 3 songs, all of them sounding like the best of their respective styles.

I always talk about the “it” factor for artists that sets them apart from their peers and there’s no doubt Autumn In June has that “it” factor and then some. Not only does he make me feel nostalgic, but he makes me feel like I’m listening to the future as he’s making music that you just can’t compare to any other artist on the scene today. Every song on MAGENTA feels like a unique journey yet they all fit together perfectly for one of the most exciting debut albums I’ve heard in a long time. It’s probably selfish of me but I already want to hear more where this came from!