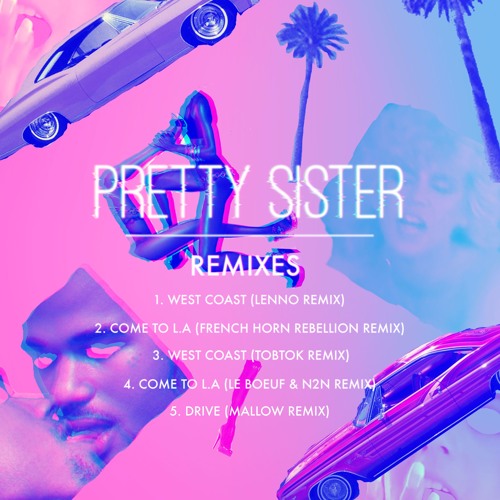 Pretty Sister is an absolute fucking gem that I *always* find myself vibing to! His west coast sound makes me feel like I’m transported onto a cool beach with palm trees and constant waves and beautiful people and it doesn’t matter where I’m at…it could be in a fluorescent lit office with no windows or a pitch black room and I’d still be put in the best mood!

So it goes without saying that I’m *very* excited about the new remixes Pretty Sister has put out, especially Lenno’s remix of “West Coast.” He takes all the sexy, kicked back vibes of the original and speeds it up into a song that makes me want to dance my ass off at a beach concert instead of laying out and soaking up the sun…god, I just wanna drive to my nearest beach as I write this! And with spring quickly approaching, it could be sooner rather than later that I’m able to live that little daydream out! I might even bring my little bluetooth speaker, blast Lenno’s remix, and really live it out the fullest, cause positive vibes and experiences are what make my life such a happy one. This particular remix came from Lenno. He is 18 and clearly knows his way around a good revamp. I always think of what I was like at 18 when I read about these young guns. They’re producing, touring the world, having an understanding and ability in music which leaves onlookers aghast. They are the doers and believers. It was not until my 25 year, I really felt I had the confidence of these guys where you look at something you are interested in or good at and say “I am going to do that. I can do that.”

I was feeling more like the lyrics to this song. Soaking in my first heartbreak and living on some pipe dreams. Take it in.

“Take it off
Take it in
Take off all the thoughts of what we’ve been
Take a look
Hesitate
Take a picture you could never recreate
Write a song
make a note
for the lump that sits inside your throat
Change the locks, change the scene
Change it all but can’t change what we’ve been.”

One of the most uncomfortable things about a breakup is the lingering thought. Like a splinter in the back of your head deep-rooted in your conscious –wishing it’d be in the subconscious– it’s a constant reminder of what happened. That said, one of the most gratifying things about a breakup is being able to say with certainty that that which you had, the other person will never emulate or find the same with someone else; like a picture no one can ever recreate. And it is the story of that Trojan stuck in our heads that Atlas Genius uses as it’s catchy tool to leave us humming the chorus over and over after the first listen.

“It’s ok if it’s gone
The thoughts that you had that it was the one
And oh what is left?
For all those times is that what you get?
Oh regardless
The walls get painted anyway
Oh you’re guarding
The gates, but it all got away

Your trojan’s in my head”

Atlas Genius struck gold with this debut single. The South Australian indie rock outfit released this one in May 2011 but it wasn’t until the group signed with Warner Bros. and released as a debut EP  Through The Glass a year later that the song really became a hit. And with remixes by Lenno (not typical Lenno remix but still dance-y), Xaphoon Jones (the most unique of the remix package and very rich musically) and this one by Monsieur Fred Falke is that Atlas Genius puts a bit in that EP for just about every taste. Make no mistake, this is a bonafide pop song infused with indie rock elements and remixed masterfully by very talented individuals.

Of course, in true Fred Falke signature it is the bassline that paired with the rock drums and all that sets this remix apart from the rest — and in my humble opinion the best of the pack. I know that once you listen to the bonus track I’ve included you’ll think it deserves its own writeup –and you’re right on this one– but I don’t want to miss this opportunity of sharing with you the unique and wonderful remix by one-half of Chiddie Bang Mr. Xaphoon Jones.