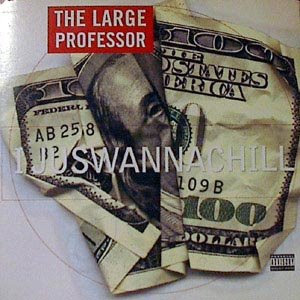 There was a time when the music in Entourage and How To Make it In America was so closely in sync with EMPT that I use to joke to my friends that someone who picked the music must have been checking out the Space Age. A few years later in a Wired interview with Scott Vener, the guy responsible for selecting music, it turns out that was actually the case –

How to Make Sure No One Else Finds It: Don’t Reveal Those Blogs to Prying Journalists

Check out the whole interview here.

One of the songs this happened with was Large Professors I JusWannaChill, I remember posting that and then two weeks later hearing it on How To Make It In America and looking at my friends like what is going on!

Anyways, this is a classic hip hop track that represents exactly how I feel right now. I recently met a very spiritual person who told me that I needed to rediscover the chilled out and relaxed part of me that’s been suppressed by a lack of love expression and acceptance in my life. The problem is that in order to find your zone you have to clean out the trash and get rid of the very things that cause the friction. You simply can’t move into the future while dealing with the past. You have to get past it and the people who are close to you have to as well. You just gotta approach it with love, let things happen and keep it moving.

That’s not always an easy process but if you’re dedicated to flying high that’s exactly what you have to do. I’ve been dealing with some love challenges recently and there things that are making me act out of character. I don’t mind because I find myself growing in the process, learning more about trust and believing in people. There’s always something positive to gain from every situation and when you know that you know that no matter what happens you’re going to be ok. To anyone trying to test what I love, you’re officially fighting yourself cause…

I don’t wanna ill, I just wanna chill and keep my hands around a hundred dollar bill.”

I was 12 years old when I heard this song and it’s been my mantra ever since.

I don’t wanna ill, I just wanna chill and keep my hands around a hundred dollar bill.”

Some people would disagree but I think a persons mood is a decision you make based on your perspective. Thoughts are things and we manifest our own reality so if you focus on something negative don’t be surprised if that negativity comes into fruition. For example, you can choose to be mad at someone and have a crappy day by focusing what pissed you off or you can focus on how to make the situation better. Of course, its easier said then done but it really is an option that most simply ignore.

But nevertheless, in 3-D’s Large Profess
With what I would call a bullshit-proof vest”

I get so confused when someone acts hostile because in the grand scheme of things it just doesn’t matter. I think this applies to love, business and everything in life. So the next time someone brings some negative energy your way tell them to hold on a minute, go to iTunes and put this records on. Enjoy.