Upbeat and incredibly catchy, “My Type” by Saint Motel is your perfect feel-good track for this happy friday. Within the first few seconds you’re hit with heavy brass and drums (sax trend alert!). The brass is fresh and modern with a splash of 70’s dance hall elements. The innocent simplicity of the lyrics makes me smile (“You’re just my type. You’ve got a pulse and you are breathing”). It also makes me think; where do our tastes develop? I’ve noticed a lot of couples that could pass as siblings. Does this make the pair narcissistic or boring in any way? Then there are the opposites. Is it the mystery that brings these couples together? And are there truly people out there who don’t have a ‘type’?

The human body is so complex, and my taste in a partner has evolved vastly since my first schoolgirl crush. It’s just about the opposite! My 10-year-old self loved Brian from Westlife and any other blond, baby-faced boy. Fast-forward 10 years and it’s all about the guys wearing Wrangler jeans and cowboy boots. And today my eyes are attuned to the dark-featured, rugged outdoorsman type. Who the hell knows where these tastes come from, and why some are so prevalent at certain times in our lives. At a subconscious level, mine can probably be attributed to curiosity; I’ve never been drawn to partners with the same background as me. That being said… I could very well get married to a half-English, half-American, half-white, half-black man. The only predictable thing about life is unpredictability! A lot of the time you won’t know your type till you see a person with certain aesthetically-pleasing features, primed just for your current stage in life. What is your type? Why?

Saint Motel is a 4-piece band from LA. If you want more upbeat music like “My Type” check out their 2 albums and multiple singles.

Although repetitive, the lyrics speak a simple message of idealized thought versus reality of human nature. If only it were so easy to inhibit the aftershock of heartbreak. How simple it is on paper, to overcome ill emotions. Easy, right? Just get rid of the pain. Just,

pull out the heart that keeps you feeling alone

Lorde has been blowing up on the music scene lately, yet this is the first time I’ve heard her in an instrument-centric song. Because she doesn’t play any instruments, her album “Pure Heroine” focuses greatly on her voice. Lorde had been covering “Easy” on tour in 2013, and recently remixed it with Ryan Lott (AKA Son Lux) to feature simple drums, deep brass, and an uncontrollable electric guitar. Her complex voice pairs well with the producer’s creepy, mysterious sounds to create a dark, contemplative mood for the listener. An interesting curve takes us off course for a spontaneous 30-second release of distorted instrumentals. If you’re not one for noise, you may not enjoy this segment as much as the rest of the song.

“Easy (Switch Screens)” is part of Son Lux’s recent 4-track release, “Alternate Worlds.” It is available now digitally and will be released on limited-edition vinyl at the end of May. Lott has also been working with indie songwriter Sufjan Stevens and rapper Serengeti in a collaboration called Sisyphus, which formed in 2012. They released their debut earlier this year. Keep your ears pricked and hopes high for another collaboration between the pair. 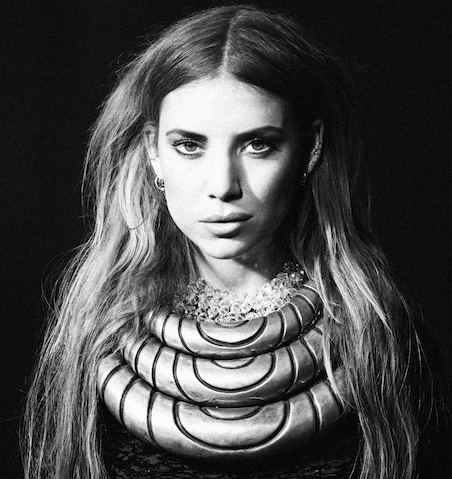 I crossed off something on my liststhis week that I’ve been meaning to cross of for a while. I crossed off “completion.” As Saturday ticked its way into Sunday, I finished my last piece of work for the year and for once I felt the proper sense of completion. I am the type of high-strung perfectionist that believes that a piece of work can never be truly finished and often when I say something is done, it’s really not ever done in my eyes. Perhaps its been this recent bout of not letting the minute things get me down and actually employing the “let go” phrase tattooed onto my collar bone, but when I hit send this past Saturday night I literally felt a weight lift off my body. There was an incredible rush of lightness and I knew then that I had completed something; that I was done and the door shut smoothly. The future now seems so open, so ready. “Welcome,” it’s saying to me, “I’ve been waiting for you.”

There could not be a more appropriate time to play this track. TV on The Radio’s David Sitek has reworked Lykke Li’s ethereal single off last years Wounded Rhymes into a track that sonically embodies the feeling of moving forward. A deep bass strum brings us in as the track’s original spacey sounds and sleigh bells echo in the background until the drum line picks us up, closes its door, and takes off down a sonic road. At times it feels like we’re chasing Lykke Li and other times it feels like she’s following us. Her wunderkind vocals play well with Sitek’s rock-saxophone and horn melodies. Wait til you get about 1:14 in and you’ll know what I mean. Sitek seems to be celebrating Li’s pursuit, the music is poppy enough to get us moving and soulful enough for us to feel Li’s infatuation. It makes stalking a little appealing.

To feel completion is to come to an end. Yet we all know that an ending signals a new beginning; an opportunity to find a new thing to follow. I’m writing this from the JetBlue terminal at JFK waiting to board my flight back home for the holidays and feel nothing but excitement. The world may or may not end this Friday, but that doesn’t mean we have to sit back and wait. We have to follow our pursuits until completion. Even then we won’t be done because something new will come along and we’ll follow something else. It’s a fabulously sublime cycle that we’re on and really the only proper thing to do is dance through it. Let this track be your guide.