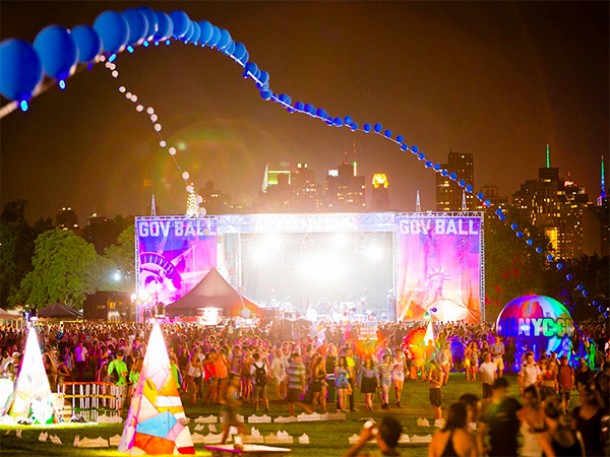 So despite the rain and mud struggles, I braved two of the three days at Governors Ball this weekend. I should have gone on Sunday, but my body just couldn’t do it. Instead of seeing Kanye, Beirut, HAIM, and all the other Sunday acts, I took a personal day of relaxation and zen. Much needed, and definitely no regrets, although I’m sure all those performers were fantastic. As for Friday and Saturday, well. It was definitely interesting. A super fun experience to have since I’ve never been to a totally muddy and grimy music festival, and it led me to believe that it’s an experience that everyone should have, especially in their twenties. Yes, it’s difficult to dance and get stoked about the music when you’re struggling with standing on two feet without slipping, but there’s a certain romantic quality in all of the mess. And I have to admit, any time I felt slightly overwhelmed by the intensity of the people or the ankle deep sludge, my friend and I escaped to the silent disco tent.

If you’ve never participated in a silent disco, make it your summer goal. They’re accessible, I’m sure at most music festivals in the city nowadays, and you will have so much fun. For all you Mister Sunday lovers, think of the crowd and general good vibes of a Mister Sunday party. Now just imagine that with noise canceling Sennheiser wireless headphones, surrounded by strangers and friends all losing it to the same music being played live by a DJ. I was impressed and totally in the zone. I had a silly/stupid moment the first time I participated in one last summer, when I realized that everyone was hearing the same music. D’oh. Favorite highlight: the two dudes dressed as referees who entered to an automatically parted crowd, warranting a male stripper-esque impromptu dance-off. As if I wasn’t already in love, the DJs who performed on each day were incredible. I can only imagine that it was as fun for them as it was for us.

As for the artists themselves, from what I was able to see, Kendrick Lamar was a definite favorite. As was Azealia Banks and Totally Enormous Extinct Dinosaurs. But Kendrick Lamar impressed me so much because I’ve seen live hip-hop at festivals before and sometimes it’s disappointing. But I was the furthest from disappointed with Kendrick’s obvious love and appreciation for the New York crowd. That made me really happy, because if I were an artist, expressing my love for my fans would be just as important as producing quality work. My only wish was that he performed my favorite song, The Recipe, which he did not. He did, however, perform Poetic Justice, which is my favorite song, so I guess it broke even. Nonetheless, The Recipe can be found below for your listening pleasure.

Again, I’m sad that I couldn’t see HAIM on Sunday, but I was just too tired and wiped out from the previous two days of trekking. Despite all of that, I was pleased with the overall Governors Ball experience, and definitely look forward to what it has to offer in the upcoming years.

*BONUS* Just because. These ladies always deserve listening to.