CHVRCHES seems to be on everyone’s minds as of late. Perhaps it’s their adorable lead singer, Lauren Mayberry, and her spacey-reverberating voice that snakes its way through your brain. Maybe it’s the fact that the other members of the band get really excited, just as adorably excited as she does, when they perform in front of big crowds. The two singers danced and flailed in a way that I can now only associate with CHVRCHES. I saw these lovelies at Virgin Mobile’s Free Fest last weekend in Maryland. If you don’t know about Free Fest, it’s basically a large-scale music festival with tons of great music, vendors, and generally great vibes. Also, it’s all free, attendance wise. They’ve got a cool mission and the entire event donates to a really worthy cause, which you can read about here.

Among the several acts that I came across in the muddy venue that became Merriweather Post Pavilion, CHRVCHES set themselves apart in a lovely way. I suppose it was a little of what I touched on earlier, the excitement of the band-members, that was both charming and modest. But there was something about the performance that felt like it was being given to a small crowd in Brooklyn, intimate yet all-encompassing. It made me feel happy and included. I’m sure you’ve all felt that overwhelming sense of lost-ness while at a music festival, like you’re so far away from the performer (unless you’re one of the few lucky enough to make it to the front or backstage), but that was not the feeling I experienced at all. It probably had something to do with the venue, too.

Other highlights of the festival included a fantastic performance by Vampire Weekend, and a visceral experience with Gareth Emery (coming from someone who really doesn’t get involved with EDM, this is a big statement to make — he did one track that mashed up Adele’s “Rolling in the Deep” and Annie Lennox’s “Walking on Broken Glass,” which was magical).

CHVRCHES released their latest album yesterday, and in honor of that, I’ve included my favorite track off the album in this post. Enjoy, and if you like it (which I know you will), give the rest of the album a listen. There’s no room for disappointment.

CHVRCHES – By The Throat Age looms just beyond the horizon; it casts its shadow just a little farther each day. As I’ve become more aware of myself, I can feel the frenetic idealities of youth solidify into maturity. For instance, I’ll be mailing my very first set of Christmas cards this year, including a well-posed photo of me and my family (of cats). While wildly attempting to photograph my two formerly feral cats, I thought of myself 10 years ago, eagerly on the brink of freedom. I was about to turn 18, and with all of my sass and determination, I had no idea who I was. Misguided as we may be in youth, that is the spirit that drives us.

Off the beaten track is where I am
Waiting for my own Athena
The crowd is high in blood, and crying sad
This is just what it is
It’s what I call the fog of war
There’s nothing here that’s clear to me
This place is not, not you
It’s just not my day,
I’d rather take freedom, than smoking arenas.”

Ah, Young Dreams. The Norwegian collective orchestrates anthems true to its name, especially with Fog of War. The drums roll in with an appropriate, battle-like quality before the lonely vocals emerge with simple determination. Suddenly our lone soldier’s army appears with a swirl of synths and strings, and the battle continues. The band released Fog of War with a set of stunning and diverse remixes from Baio of (Vampire Weekend),  Korallreven and Lemonade. While we wait a full-length, I’ll drink to my youth and the music that reminds me of it.

CuDi was at our last Noctambule party which I haven’t really gotten a chance to talk about with all the bizz going on. The party was a success, the place was packed but the damn AC blew out at The Eldridge which made it hard to stay inside for too long. Thanks to everyone that stopped by, we’ll be doing it again soon so stay tuned.

I’ve been somewhat neglecting the martian lately so I thought this would be a good opportunity to catch up. I can’t listen to it all the time because I’m a strong believer in only focusing on positive thoughts but CuDi’s melancholic somewhat depressing never fails to entertain and get the thoughts flowing. Here are two of my favorites that were released in the last couple of months, as much as I’d love to chat about it I have to run so kick back, listen to the lyrics and embrace the martian.

Once again I have to take a moment to recognize some amazing production. This time I have to give it up to Bloodshy & Avant aka producers of Miike Snow, many Britney Spears and Madonna to name a few. The new sound they’ve cooked up for Miike Snow is really impressive. The synth and sample combination isn’t something totally new but the way they’re doing it is and I like it. Anyways, it’s Friday and as usual I have ten million things to do before I can officially go into weekend mode. Thought this was a good mellow/upbeat song to get you through the painful hours left in that miserable workplace, enjoy. 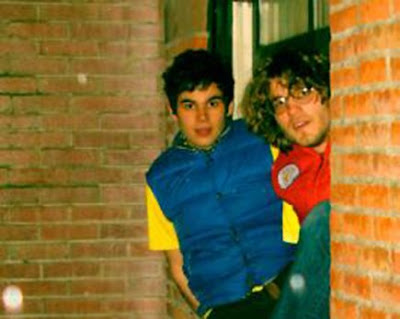 I was going to post the original version of Can You Tell but I ran into this forgotten gem of a remix while looking for the MP3 soI decided to make it the subject of this post. Can You Tell was one of my favorite â€˜08 songs, itâ€™s a simple love song dealing with those initial jitters you get when first falling in love with someoneâ€¦ You know how you question everything you do, everything feels on edge. Are you showing to much interest? Playing it too cool? This is so amazing – do I even like this person? Most would agree this is the best part of getting into a fresh relationship and the main reason â€œI donâ€™t like it unless itâ€™s brand new.â€

Ra Ra Riot – Can You Tell

Oh have I been to discreet
How long am I supposed to wait
I think about you nightly
Oh can you tell iâ€™m losing sleep.â€

Discovery is the electro/pop side project of Rostam Batmanglij of Vampire Weekend and Wes Miles of Ra Ra Riot. Great remix, wouldnâ€™t say itâ€™s better than the original but def worth while, enjoy.

Itâ€™s so easy to like Vampire Weekend that some people feel as if itâ€™s not cool to do so. Ah, the many dimension of being a poseur. Too bad, your missing out on some good feeling music.