“And in her eyes,

I saw why you fell for me.

And i used to see it in your eyes
It ain’t what it used to be.

Lost are the memories.”

I’m all about the eyes, and the power of what you can say through them that you don’t with your lips. They can’t lie, and this song is all about reading between the lines, asking for one last chance, begging not to be left and leveraging that lust and desire that can’t be denied in that look into the other person’s eyes. This is such a beautiful song, perfectly executed down to the harmonies by those sexy female backup vocals.

I learned about this song’s release after reading Vito’s banter on Twitter on how Facebook is so unfair that if you don’t pay for a post no one will see it. Dear Vito: when you produce stuff as good as this, you don’t need Facebook for it to explode. It’s a matter of time. Quality music is like a cork, it always finds its way afloat.

The boogie sexy down-pitched vocals come in after the 2:20 mark and that’s when I was swept off my feet. It’s another level of coolness, crooning and sweet begging. And then it’s all about that bassline’s starring role in this movie. This song is so good, it hurts. I purchased the Radio Edit and I’m now regretting not looking for an extended remix or something that’s longer ‘cause I just can’t get enough of it.

I know you want me.
I made mistakes.
But look at my eyes,
You’ll know I want you.
I know.
I see the tears covering your eyes,
From the things that I do.
Look at me,
I don’t want you to leave me.” 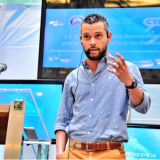