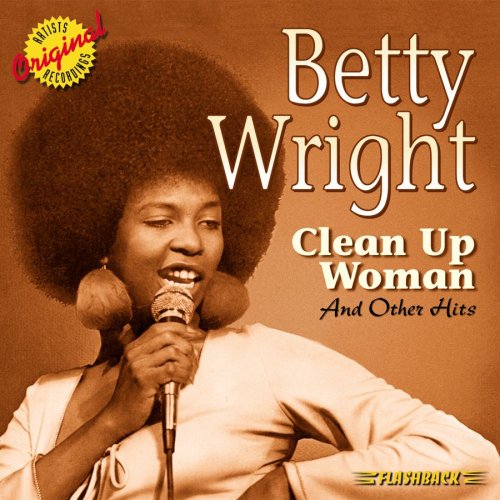 By now you’ve heard of Lorde, the 17-year old pop sensation who has  taken over international airwaves with a slew of stripped-down, subtle hip-hop crossovers. It’s exciting when someone so young comes out of nowhere to score a huge hit, especially one with such an “authentic” image (in these days of Photoshop and costumery, anyone who wears their natural hairstyle gains street cred).

But the novelty factor is hyperbolic. There have been many young stars to come and go over the years. Few have had significant staying power, though some notable exceptions (Judy Garland, Beyonce, Stevie Wonder to name a few) have left their permanent mark on the cultural landscape.

Today I’d like to introduce you to an artist you likely haven’t heard of: Betty Wright.

Ms. Wright began her career at age 2, singing in a gospel group with her siblings in Miami. Her solo career kicked off in 1966 when, at age 12, Wright signed her first record deal. She scored some local radio/club hits in her early teens, before bursting onto the national stage with “Clean Up Woman,” released just after her 17th birthday. The song reached #2 on the R&B charts, and became a crossover hit, reaching #6 on Billboard’s Hot 100 (when it mattered) and staying on the chart for 14 weeks. The rest of Wright’s career has been wildly successful: international tours, production for mega-stars, Grammy nominations and wins, and a continual output of new music (including a feature on a Lil Wayne track and collabs with Snoop Dogg and Joss Stone). Her biggest hit, “Tonight is the Night,” has been a cultural standby, sampled in honey classics “Knockin Boots” and “I Wanna Sex You Up” (which did so illegally, netting Wright a fat settlement).

And she opened for Bob Marley on the Survivor tour. LEGEND.

Kevin Casey left us with a sample-less Saturday yesterday so I thought I’d do one myself and answer a request I got about an old RJD2 post I did last year. The question was,

Do you by any chance know where I can find which songs were sampled for this song? Thanks =D”

The answer to Sara’s question is yes and no, there are so many little obscure samples in this song that unless we asked RJD2 himself it would be impossible to track. However, there are a few main songs that you will easily recognize, those are Betty Wright’s Secrecy and Elliot Smith’s captivating acapella I Didn’t Understand. Both are great songs in their own right and RJ has combined them to make one my favorite productions of all time. I’ve praised Ghostwriter before but I have to note how impressive RJD2’s transformation work on this is. I Didn’t Understand is a rather sad song about lost love and the confusion and rejection people experience when their significant other does an emotional 180 on them..

At this point in my life I’m pretty frozen to these emotions but even so I can feel the extreme melancholy this song creates when listening. Somehow RJD2 managed take a hopeless, depressing and somewhat dark song and transform it into an energetic and upbeat instrumental full of hope and optimism, fresh.

It’s very ordinary for the secretary to take a man away from his wife.
Girls we make it necessary for the secretary to put a little joy in his life.
She takes the time to listen to what he has to say, while all you is nag him a thousand time a day.
Her hair is always pretty and he clothes are always stylish
But you great him with your hair in rollups but that’s outdate and so childishâ€¦”

Betty Wright’s Secrecy is a song about a guy whose having an affair with his Secretary because his women at home is a square.Â  This song is about women, but dudes should take note because its the classic story of taking what you have for granted and being boring in general. When you hold something back, aren’t adventurous, create rules and limits in your relationships be it sexual or emotional or whatever don’t be surprised if that guy or gal goes somewhere else to fill the void.

And when he tries to love you, do you find something else to do?”

Aside from the entertaining lyrics this is just another great feeling soul track with an incredibly catchy horn arrangement, enjoy.