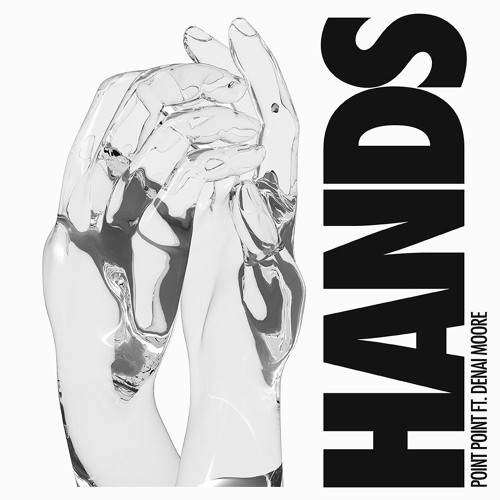 A car floats 1,000 feet above the earth’s surface and the city around it continues to stretch beyond the stratosphere with a decadent silver-and-white glow. A glass platform leads into the nearest building and minimalist décor equates extravagance. In the middle of the entrance stands a pedestal upon which a thixotropic set of hands rests. They shimmer with a subtle ebb and flow that feels human – so obviously synthetic yet, as nuanced as an organic composition.

Maybe it’s because I was reading up on Blade Runner 2049 last night, but the artwork for Point Point’s “Hands” immediately took my mind to a place of pure imagination. Once I digested the music itself, it only elevated my futuristic fantasy further as the track balances such urgency in its lead-synth with lounge-leaning relaxation in Denai Moore’s vocals, each diametrically opposed approach consuming one another in a circular motion like the balance of organic life and its synthetic constructions.

It’s okay to feel the rings on my hand, my love, my enemy

The song itself is made of a total of 19 words. Their repeated phrases above combine into a hypnotic melody of sound that L.A.’s Josh Legg of Goldroom spins into a futuristic tribal dance. Where the original track takes on a more ethereal approach to the composition, Goldroom’s approach is honest dance. Keyboards bounce over a sharp drum and marimba while ALPINE’s vocals are mixed and overlaid on top of one another creating a sound that jives through your whole body. The airy sound of the original is kept and lends itself to the space-age vibe this track gives off.

Maybe it’s just me, but I imagine that if some extraterrestrials were to come chill on earth, they’d be playing this song. It’s opiate effect on the body would have us moving and easy targets if they decided to invade and all that. Although now that I think about it, I wouldn’t mind getting abducted by aliens who played tracks as good as this – at the very least I’d be surrounded by quality tunes.

As for now? This is a brainwash worth having wherever you are in your day.