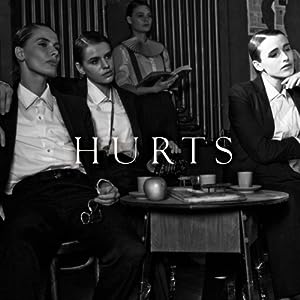 I heard these guys about a year ago and they just released a this new single which caught my attention but I never got around to posting it. Their music is best described as thoughtful emo-electro, think of La Roux or Depeche Mode. I dig the music but what’s really making me gravitate to these guys is their extremely dedicated approach to entertainment…

There’s a lot more to Hurts than just the music, we’re veryÂ consciousÂ of that. The music doesn’t work without the rest of it… And that’s always appealing to me, when you can see that they’ve kind put their heart into it.”

Nothing feels quite better than love but for me putting on a big show is a damn close second. These guys are gunning for the top and are making no comprimises in the process. Everything they do shows it, from their high fashion inspired image to their hugely over ambitious videos and hugely theatrical approach to music, it’s very inspiring.

IÂ obsessÂ about every little detail EMPT related and have a tendency to push the limits to make sure you guys get the best of the best so I know exactly what these guys are going through. Does it feel better than love? I don’t know but when I see your emails and thank you’s I instantly get a big smile on my face and it motivates me to do even more.

So maybe we’ll be happy and enjoy it because weÂ flagellateÂ ourselves on a daily basis because of the cause, because we have, because otherwise we won’t be happy when it’s finished…”

Check out the video, it’s refreshing to hear artists talk about their commitment to the game, enjoy.