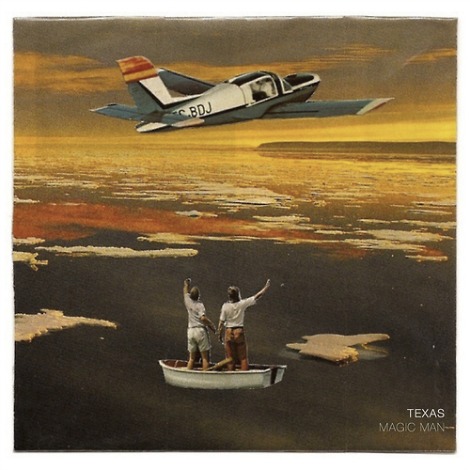 Well here’s another track from Magic Man. We went to “Paris” with them at the beginning of March, and now — a weekend before we exit the month like a lamb (fingers crossed), we’re heading to “Texas” still reeling like a lion.

The track dropped yesterday, and personally, I haven’t been able to stop listening to it. Magic Man describes their sonics as “triumphant synth rock.” There are no words better to apply to this Rhode Island band. They’re really something to keep your eyes on this year. “Paris” showed their softer side, a side that proves they’re pop (the track’s hook is infectious), but deep enough in writing and musical composition to set them apart from other emerging artists as the — I hesitate to say this — genuine ones. They aren’t trying to be anything but themselves. Confidence is laced within their sound and it’s done shamelessly, and therefore honestly. You cannot be shameless in dishonesty.

I digress. “Texas” begins with a lo-fi recording saying, “You are about to embark on the most wonderful experience of your life” before synths roar in, symbols crash, and the drums bum-bum-bum with gusto. It’s quite the welcome if there was any. From there we’re brought into a world that’s rooted in New Order, early 2000’s alt-rock (you know like those indie bands you’d put on your MySpace? This is a good thing F.Y.I.!), and Neon Trees. They’ve pulled their influences together, made a hearty stew out of ’em, and are serving something uniquely Magic Man. “Texas” itself isn’t mentioned at all during the powerful three-and-a-half-minutes, but that’s besides the point. This track is yet another confessional. Instead of wishing away love, they’re fully invested in it and willing to travel to “whatever coast” to make it work. It’s rather endearing, to be honest. And perhaps I’ve never really felt that strongly for anyone, but this kind of emotion seems “wonderful.” It’s probably anything-but, but who’s to say.

What I can say is that this track should really speak for itself. If there’s anything to take away from and comment on, it’s the idea of embarking on a “wonderful experience.” Be it a new job, moving to a new city, exploring a city alone for the first time, falling in love, or simply wearing whatever you goddamn please and not caring because the experience of doing you is more wonderful than following the status quo. The weekend is hours away, too, and every weekend should be a wonderful experience in itself. Hell, as cliche as it may sound — life is a wonderful experience. And with a song like this to add to its soundtrack, it just got a whole lot more wonderful. What could possibly be more comforting than waking up and turning on a track like Magic Man’s blissfully-nostalgic track “Paris?” I can’t think of anything except for say waking up next to your lover and playing the track; maybe you’re listening to it over a cup o’ joe. From the moment the piano bounces its way through your ear-drum, the synths chime in, and the drums mosey on in, you’re senses are awakened and your ears are alive with a springy buzz.

But now sweetheart, listen to the way I
Cannot forget a single day I
Spent rolling all around the room with you.
It’s just a fantasy, taking over like a disease
Pull me out of this I can’t breath
It’s burning through my chest.”

The story here is one that seems appropriate for a Saturday. It’s about a lost relationship; one that lives inside his head rather than manifesting itself in real, tangible life. Throughout the track he reminisces on the things he should have done, should have taken note of, been keen to — things I’m sure we can all agree are close to impossible to do in the throes of infatuation. I often struggle with living between the life-is-right-now-do-what-the-moment-calls-for type of mentality  and the tomorrow-is-very-real-plan-for-that kind of mindset. In relationships, you have to walk the wire between the two. You walk above shoulda’s and aught to’s and skirt around dealing with the reality of the situation. Which leads me to question whether or not we ever fall for someone or if really we ironically fall in love with the ideas of the days ahead we can spend with someone. I’m slowly becoming an optimist and because I woke up happy and I’m excited to see this new, more honest type of thinking working in ways I was hoping for but not expecting I’m going to argue the former. Although, it could very well be I am in the thick of infatuation and I can’t see beyond it. Perhaps I’ll wake up one day and sing this tune to the name of New York (which doesn’t hold as much romanticism as Paris does, does it?).

No matter. I’m just going to keep this track going, get day-drunk off its joyous synths and  Foster The People meets Passion Pit vibes. Magic Man describes themselves as a “triumphant synth rock band.” They could not be more right. They’ve found the triumph in an emotion that could have easily lent itself to a morose, mopey tune; which gives me hope that something good can exist even in life’s rawest moments.

Once again back is the incredible…” – Public Enemy (Bring The Noise)

There’s not much you can depend on in this world, lovers always seem to let you down, there’s never anything good on TV, the radio is lame and the Knicks never win but there is one thing that won’t let you down and it’s LMDM. And guess what, it’s back again for the 13th time with 13 new songs custom made for now, not now but right now. I was putting this tape together for Steph and couldn’t get over how in tune it is with how things feel right now. The heat is coming in, the BBQ’s are burning, the beaches are being invaded and everything is in transition. We’re halfway into 2010 and there’s no shortage of things done and things to do, but there’s no valid reason to not enjoy yourself in the process. Once again, Steph has given us a musical experience full of highs and lows as entertaining as they come. I’m in sunny LA and have to go get some breakfast then head over to Hermosa but bet your best buck I’ll be having this in the background. Here are some words from the chef herself, enjoy.

It’s finally summer. Le Miel du Mois: Juin is filled with new little discoveries including long walks on the beach, magic man, letting up despite great faults, home video and more. if you dont know these artists individually, check them out. you wont be disappointed. let the summer amazingness begin. sun on your face. feet in the grass. and running around with empt in your headphones a l l s u m m e r l o n g.”