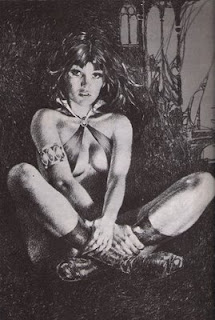 For those of us who were once comic book aficionados the name Jose Gonzalez doesn’t exactly ring Swedish indie-folk singer songwriter. Instead it means bad ass comic book artist with incredible vision and a gift for drawing the female form with such refinement and skill few have ever been able to replicate. Gonzalez became a legend in the comic book world through his work as primary artist for the main character in a series called Vampirella. The story is about a vampire girl from the planet of Draculon who comes to earth by killing off some astronauts and stealing their ships. When she gets to earth she turns good and becomes a heroin and spends her time getting rid of evil, fresh.

Now I don’t know about you but I’m very much into the female form and can usually put aside the normal guy lust to appreciate it in a truly artistic way. Take a look at some Jose’s work and you’ll see what I mean… Gonzalez passed away last year but his influence and the respect he has in the inner circle of comic book fans and artist alike will live forever. So what does this have to do with the song I’m posting today? Absolutely nothing really but this art noteworthy anything this good is worth mention. Now all this was not a diss on JosÃ© Gonzalez the Swedish singer, in fact it was because of this cover song that I felt nostalgic about my old comic books. Either way, here’s a cover song perfect for your Sunday morning recovery. I’d love to chat but no I’m distracted and have to go find some of these old comic books, enjoy.